The majority of mortgages originated in recent years have been guaranteed by Fannie Mae and Freddie Mac. These Government-Sponsored Enterprises (GSEs) do not issue loans directly, but instead they purchase loans from lenders, package them into securities, and sell them to investors. These loans are often referred to as “conforming” loans and usually come with lower rates than “non-conforming” or “jumbo loans.” 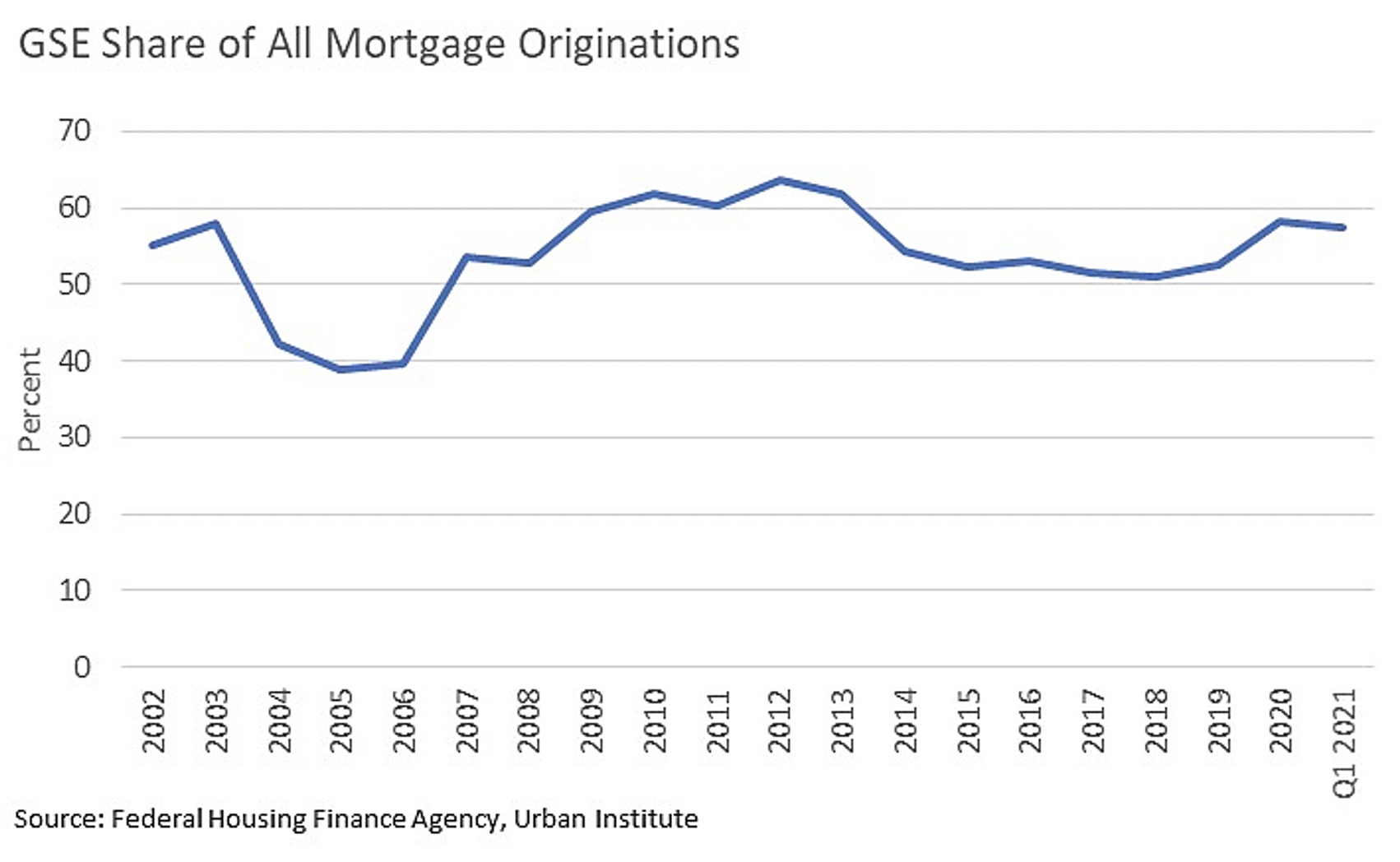 Together, Fannie Mae and Freddie Mac accounted for nearly 60% of all new mortgages during the pandemic, which is down from the recent peak of nearly 64% in 2012 but is much higher than back in 2005.

Fannie Mae and Freddie Mac only acquire mortgages that are below a certain size, defined by the “conforming loan limit.” The GSE loan limits are adjusted each year to take into account rising home prices.

In 2022, the baseline conforming loan limit will be $647,200, which is an increase of 18% over the 2021 loan limit. The GSE loan limit is higher in areas where home prices are higher. In these high-cost areas, borrowers will be able to get a conforming loan of up to $970,800. There are 18 counties and independent cities in Virginia—all in Northern Virginia—that are designated as high-cost areas with the higher GSE loan limit.

The Federal Housing Finance Agency (FHFA), which sets the GSE loan limits, aggressively raised the limits for 2022, citing the fast pace of home sales price appreciation over the last year.

Statewide, the vast majority of home sales in Virginia would have likely qualified for a GSE-insured loan based on the size of the loan. However, in some local markets, the 2021 loan limits forced some home buyers to shop for a jumbo loan, which often have higher rates. As a result, some buyers were not able to take advantage of the historically low rates in the market over the past 12 months.

Under the 2021 loan limits, there were 15 counties and independent cities in the state (out of 133 total) where 10% or more of home sales likely would not have qualified for a GSE-backed mortgage. (These estimates assume a 20% down payment.)  Some of the markets where home prices made a conforming loan impossible were located in the state’s highest cost markets, where the loan limit was set higher. For example, only an estimated 67% of homes sold in the City of Falls Church in 2021 likely would have met the conforming loan limits. In Arlington County, the share was 77%.

But the conforming loan limits shut out buyers in other parts of the state, as well. More than 10% of sales in both the City of Charlottesville and Albemarle County alike would not have been eligible for a GSE-backed mortgage under the 2021 loan limits. Parts of the Middle Peninsula, Northern Neck, and Eastern Shore, where the housing market has been soaring during the pandemic, also had relatively more limited access to loans backed by Fannie Mae and Freddie Mac. 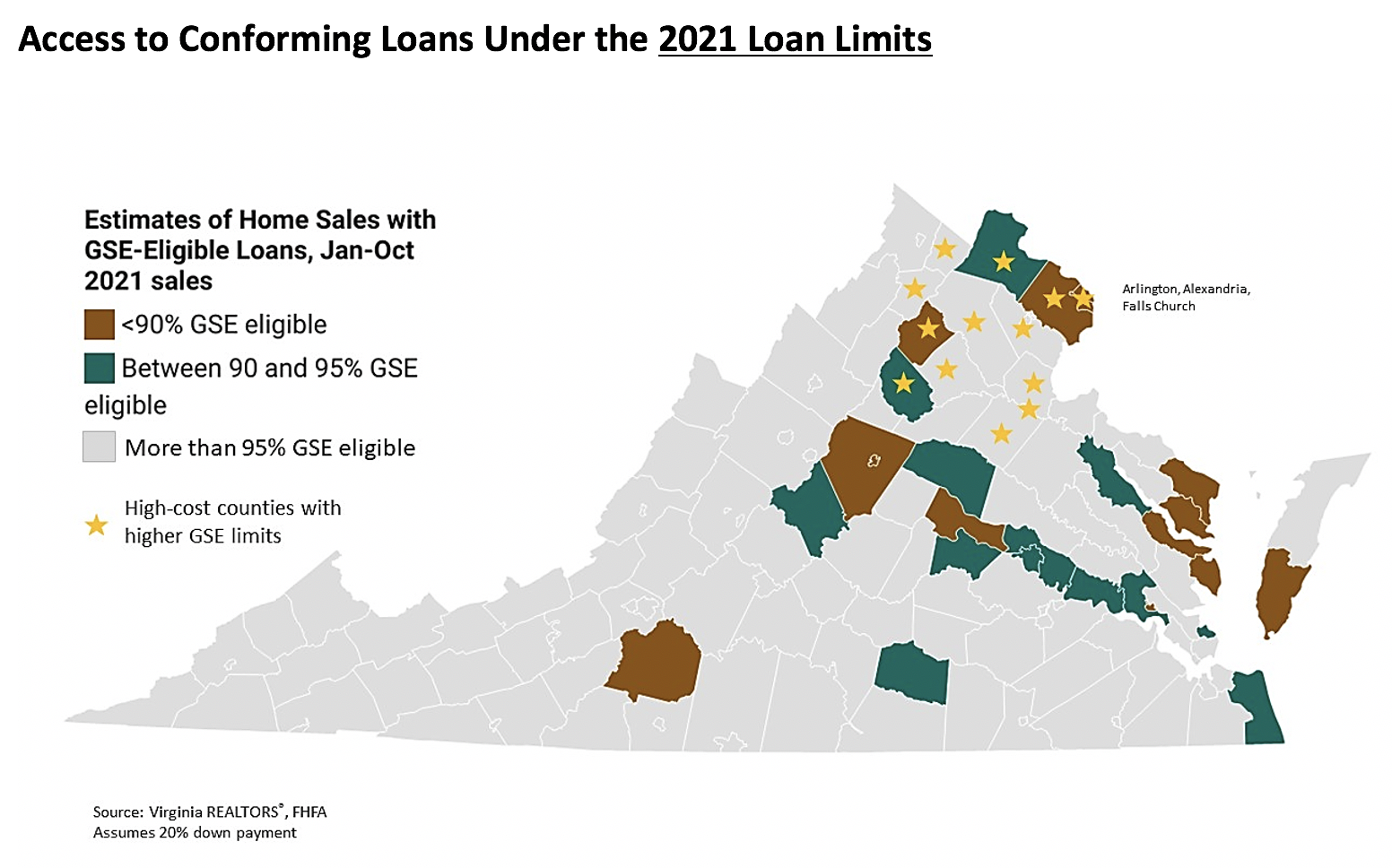 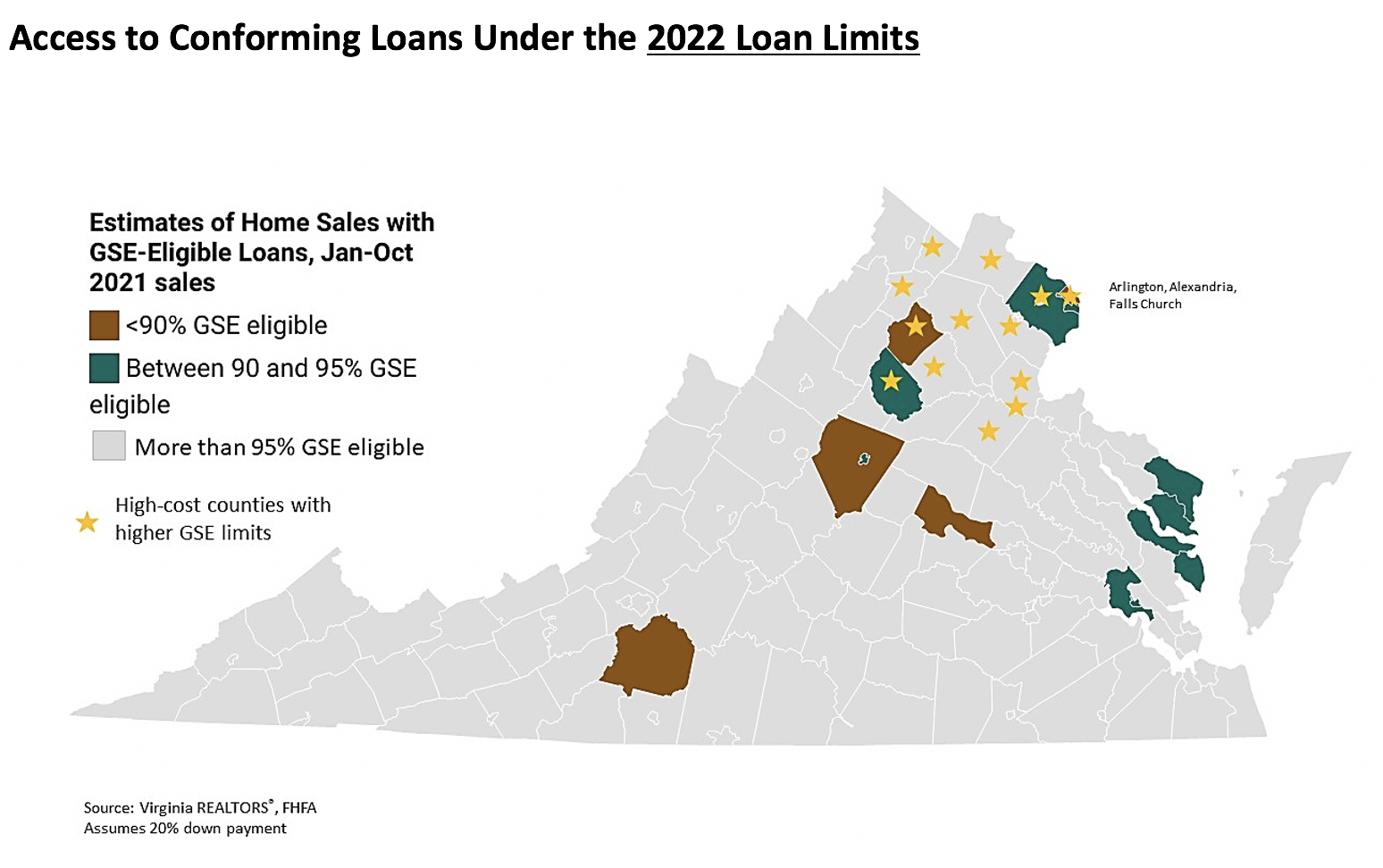 The increase in the GSE loan limits will allow a greater number of homebuyers to access the more favorable rates associated with conforming loans. If the 2022 loan limits had been in place this year, more sales would have qualified for a conforming loan.  In only six counties and independent cities would more than 10% of home sales in 2021 not have been eligible for a GSE loan under the increased loan limits.

Even with the loan limit increases, affordability and lack of supply will remain challenges in most Virginia markets in 2022. In addition, despite the expanded access to conforming mortgages, there will still be a subset of buyers who will need to shop for a jumbo loan. Providing education and resources to prospective homebuyers will put them in the best position to purchase a home under the new rules and in the changing market environment.