Nationally, new residential construction continued to climb in September 2020, with the sharpest increase being in new single-family construction, much like how single-family construction is booming in Virginia. Strong demand for homeownership has been supported by historically low mortgage rates and has continued unabated through the recession. The appeal of single-family homes—as opposed to multifamily apartments and condominiums—has grown during the pandemic. A shift to more working from home and concerns about the prevalence of COVID-19 cases in more urban areas has fueled a shift in demand for homes in rural and suburban markets, as well as larger single-family homes. 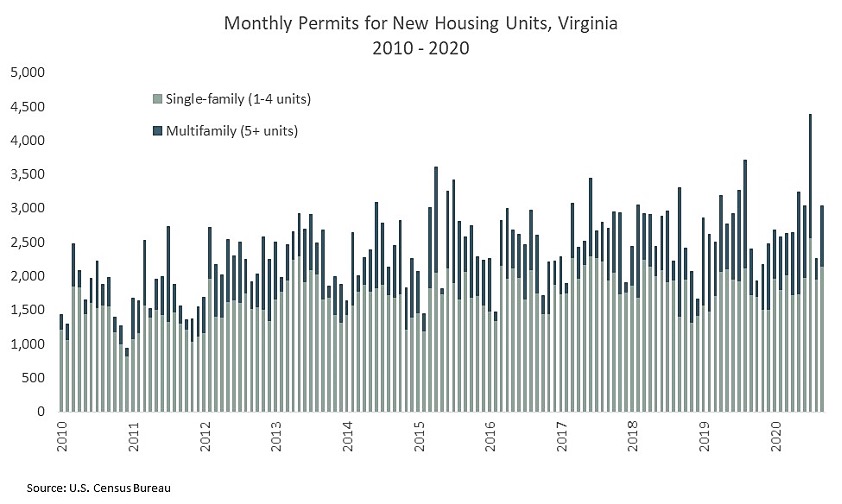 Over the period of January through September, there were 26,548 permits issued for new housing units in Virginia, which is up 3% from 2019. Year-to-date, about 78% of permits for new residential units were issued in the state’s largest metropolitan areas (i.e., Northern Virginia, Richmond, Hampton Roads, and Charlottesville.) By contrast, in the first nine months of 2019, more than 91% of residential building permit activity was in these large urban areas. New home construction has been shifting to more exurban and rural areas of the state.

During January through September 2020, the number of residential building permits issued in Northern Virginia was down 24% compared to the same period last year. In the Richmond metro area, permits for new housing construction was down by 12% compared to a year ago. Building permits were up by 15% and 3% in the Hampton Roads and Charlottesville areas, respectively. However, the number of residential building permits surged by more than 150% in 2020 outside of these four metro areas. 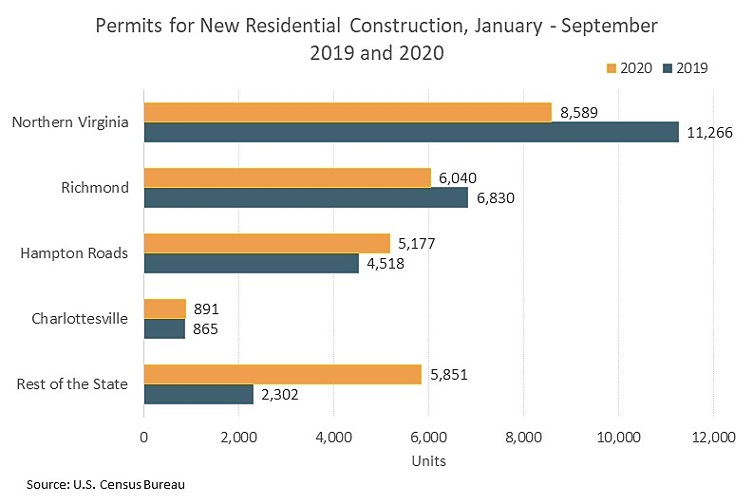 Despite the increase in new single-family construction, there is still a significant inventory shortage in Virginia. In August, the number of single-family homes available for sale statewide was 42.2% lower than a year earlier. There are no signs that the inventory of homes for sale will increase in the near-term. Homeowners are remaining in their homes longer and low mortgage rates have fueled a refinancing boom which will only lengthen homeowners’ tenure. A significant increase in new residential construction is the only way inventory pressures will be eased in the near-term.

According to the December 2020 Home Sales Report released by Virginia REALTORS®, Virginia’s housing market surged in the second half of 2020. Despite the COVID-19 pandemic and economic downturn, there were… Read More

By almost any measure, housing costs are extremely high in Arlington and in many other parts of Northern Virginia. The region attracts workers and families, in large part… Read More

Virginia’s Economy by the Numbers: January 2021

It is finally January 2021. We’ve put 2020 behind us and are ready to look ahead to improving economic conditions in 2021. With the inauguration of President-elect Biden,… Read More