Each month, the Virginia REALTORS® Confidence Survey gathers insights from REALTORS® on local housing markets based on their experiences with real estate transactions in the prior month. This information provides a real-time look at housing market conditions. This month’s Confidence Survey was conducted between June 23 and 28, 2022, and reflects housing market conditions in Virginia in June 2022. A total of 736 Virginia REALTORS® members responded to the survey, including 580 who had participated in a home sales transaction in the prior 30 days.

According to Virginia REALTORS®, buyer activity continues to slow down. The Buyer Activity Index for June 2022 was 48, which is down from 56 in May, and the third straight month of a drop in the index. This is the first time the Buyer Activity Index has dipped below 50, which indicates that more survey respondents reported the level of buyer activity to be “low to very low” instead of “high to very high.” About 26% of REALTORS® rated the level of buyer activity in their local markets as “high” or “very high” and about 30% of REALTORS® rated buyer activity in their local market as “low” or “very low”. 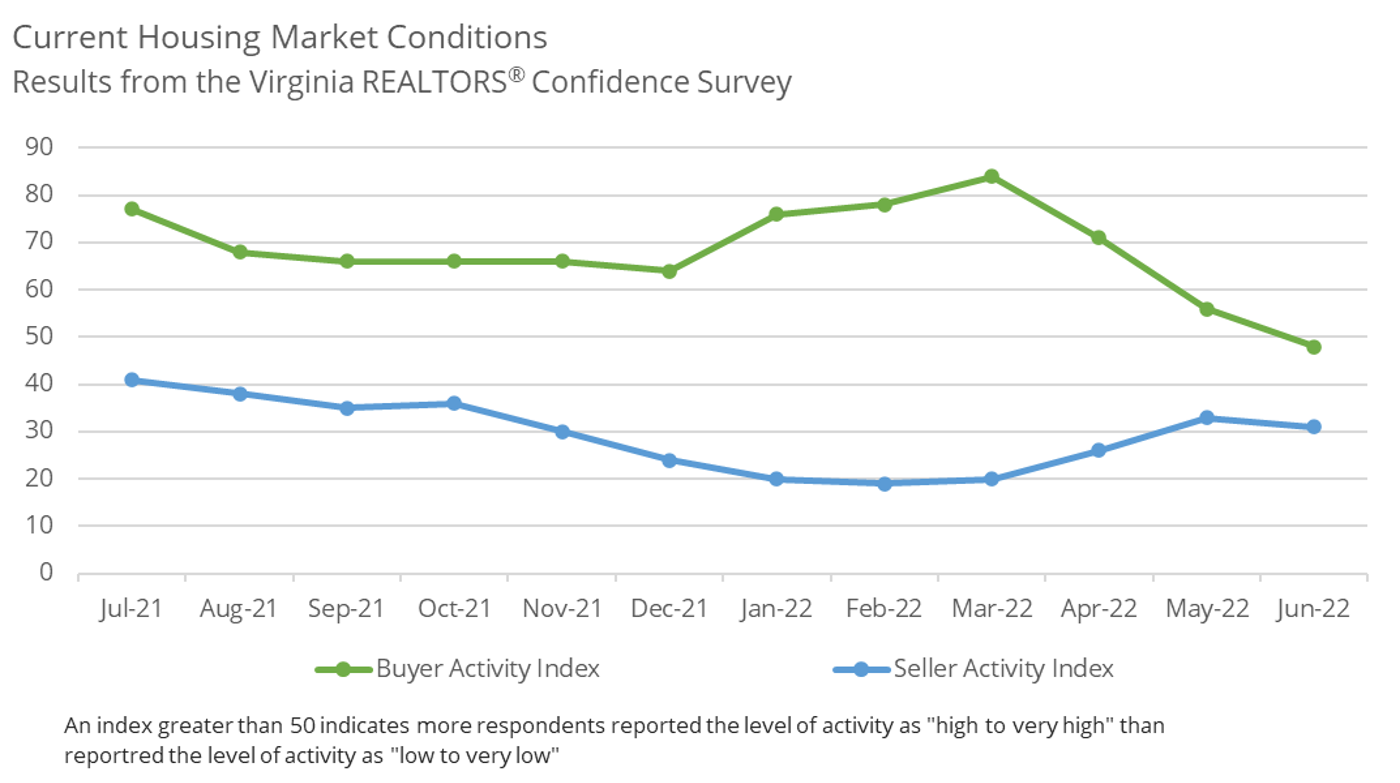 Roughly 27% of buyers in June were first-time buyers, according to survey respondents, which is three percentage points lower than last month, an indication that rising interest rates are likely keeping more first-time home buyers on the sidelines. Cash purchases stayed the same compared to last month at 16%, which is still the lowest share for all cash purchases since the survey began in July 2021. In June, there were about 15% of non-primary residence sales (e.g., rental property, second home, vacation home), this is also unchanged from last month.

Sellers continued to receive multiple offers, and the average number of offers rose slightly from May to June, according to REALTORS® responding to this month’s survey. Recent transactions received an average of 3.1 offers in June, whereas last month there were 2.9 offers on average. More than half of the respondents (56%) stated that offers came in above list price in June, which is a decline from last month.

Confidence in future home buyer activity has been declining in recent months. This index gauges how REALTORS® think the market will be performing in three months’ time. The index fell from 45 in May to 39 in June, which is a significant drop from this year’s high in January with a level of 83. Only 13% of respondents indicated that they thought buyer activity in three months would be strong in their local markets.

The Seller Activity Index: 3-Month Outlook held steady in June. The index was 42 this month, unchanged from May. However, the outlook for seller activity remains weak. Only 12% of Virginia REALTORS® reported that they think seller activity will be strong in three months, which is down from 14% of respondents last month. 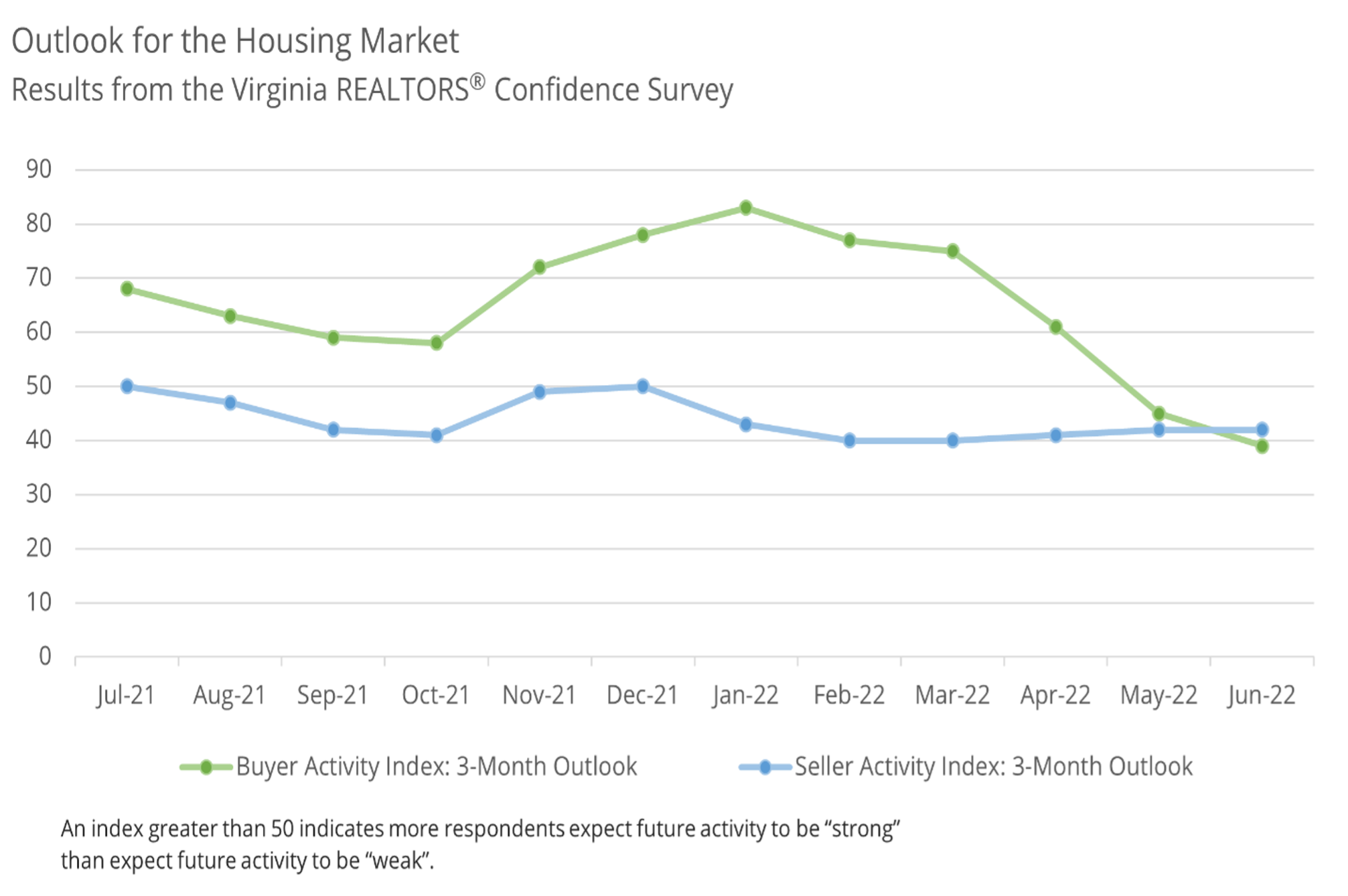 The share of survey respondents who expect prices to rise in their local markets in the next three months dropped again to the lowest level since we began tracking the survey in July 2021. About 19% of Virginia REALTORS® responding to the survey stated that they believed prices will continue to rise. Another third of REALTORS® (30%) responding to the survey indicated that prices would remain the same for the next three months.

A note about surveys: This is not a randomized sample survey of Virginia REALTORS® members. However, the number of responses and the geographic coverage of respondents make it possible to draw conclusions about the opinions and expectations of Virginia REALTORS®. These statistics from this survey have a margin of error of +/- 3%.

Assumable Mortgages: What Are They? Will They Make a Comeback?